After moving around the country for years while working in the healthcare industry with her husband, Debora Urquidez found herself grounded in Columbia.

Since early 2012, Debora has been taking care of both her mother and aunt in her home.

Her mother, Jo Ann Gelofsack, 82, has late stage dementia brought on by a stroke she suffered in 2006, and her aunt, Jacqulynn Nance, 87, has dementia that had been creeping up on her as she got older.

Debora, the primary caretaker for the two sisters, opted to keep them at home with her, where she can attend to them quickly and pick up on smaller issues that might otherwise go unnoticed at a nursing home.

“It’s like they’re reverting back to childhood,” Debora said when talking about their dependency on her and of her daily schedule for waking them, dressing them, and getting them ready for breakfast in the morning.

Debora makes sure her mother and aunt still enjoy life with numerous animal and bird feeders in the backyard so they can watch the wildlife. She also arranges spa days for the sisters to get their nails done and hair cut.

Making them comfortable and secure as the dementia progresses is what Debora had in mind when she and her husband made the decision to move the sisters to Columbia from New Mexico to live together again for the first time since they were young.

“It is hard because you’re watching your loved ones day to day,” said Debora. “You’re caring for them and making them comfortable while they’re dying.”

Photographed on assignment for The Columbia Daily Tribune 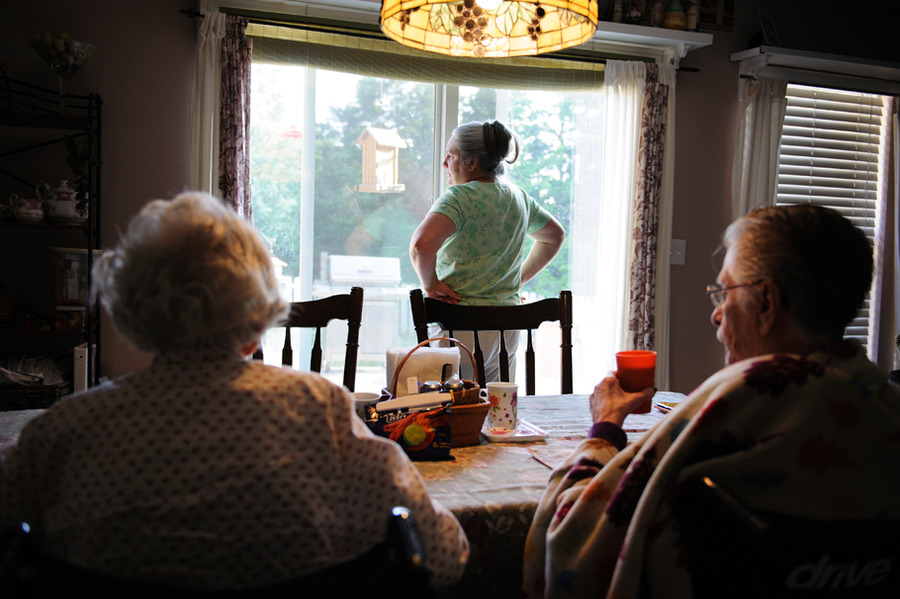 Debora Urquidez looks out to the backyard after giving breakfast to her mom, Jo Ann Gelofsack, 82, right, and aunt Jacqulynn Nance, 87, on Thursday, Sept. 19. Jo Ann came to live with Debora in January 2011, and Jacqulynn came in April 2012. Debora only gets time alone when she has a private care nurse or hospice aide to watch over the sisters while she's out of the house. 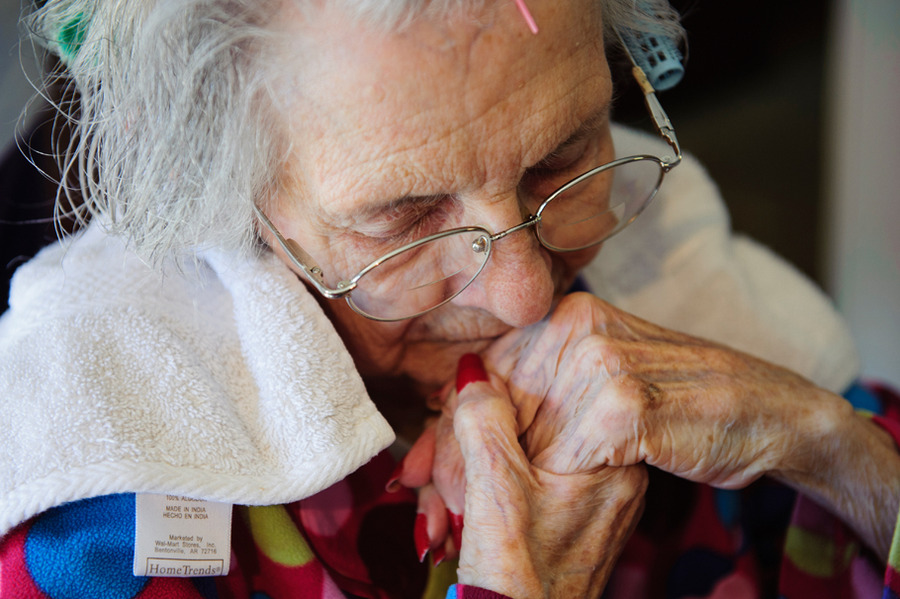 Jacqulynn rests her eyes while Debora curls her hair on Sunday, August 25. Debora tries to have spa days for the sisters at home to get their hair done and nails painted, something they loved to do when they were younger. 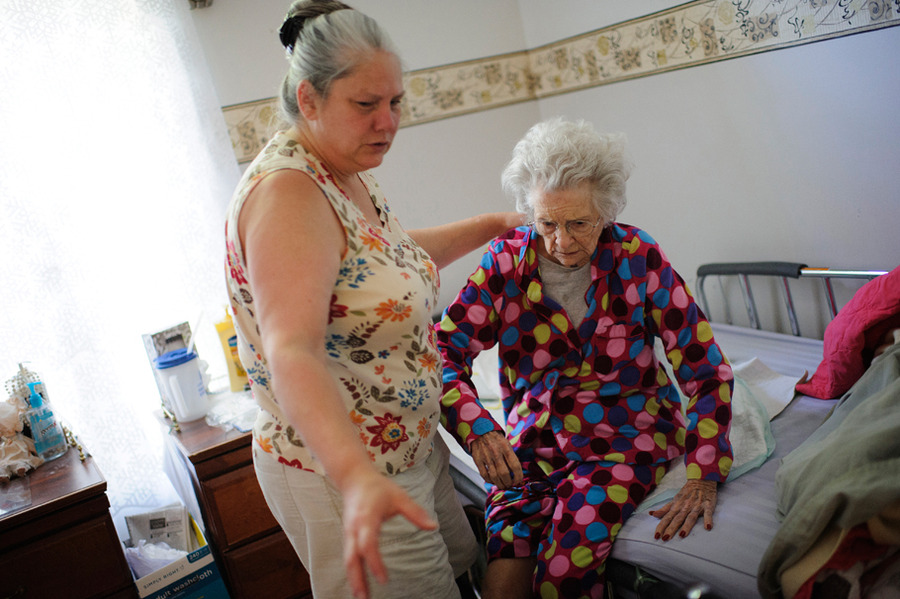 Debora helps Jacqulynn out of bed in the morning on Thursday, August 28. Picking up the two women to get them in and out of their wheelchairs recently caused Debora to suffer a herniated disc in her back and she now relies on her husband and nurses more with the care of the sisters. 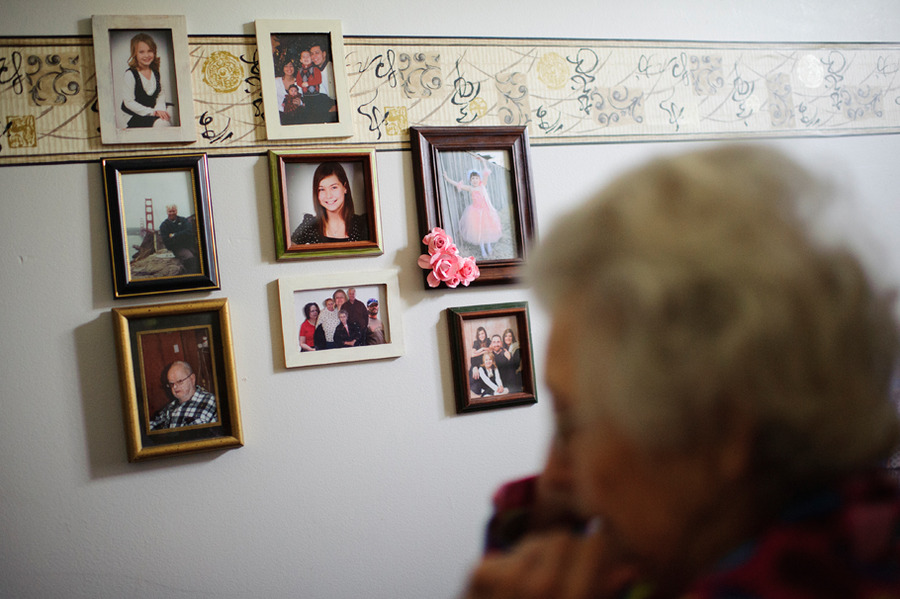 Pictures hang low on the walls in their bedroom so the sisters don’t forget the faces of their family members. Debora's brother Mark passed away unexpectedly in 2012, and her mother insisted his photo, center left, be taken down just before she stopped speaking. Jacqulynn asked that the picture be placed on the night stand next to her bed. 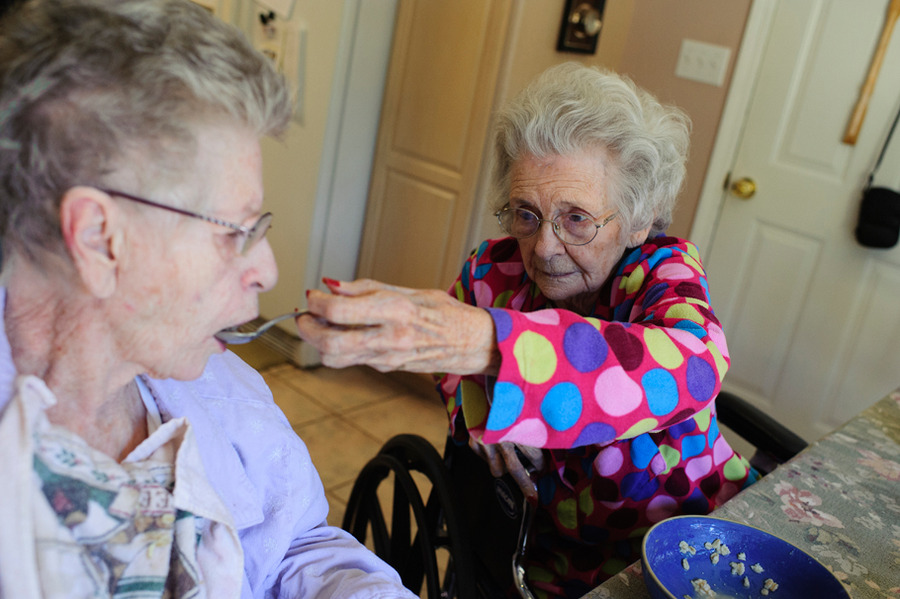 Jacqulynn feeds oatmeal to her younger sister, Jo Ann. Jacqulynn makes sure her sister always finishes her meals and gets frustrated with how much she sleeps during the day, stating she needs to stay awake more to fight the dementia. Jo Ann's dementia is further along than her sister's due to a stroke she suffered in 2006. 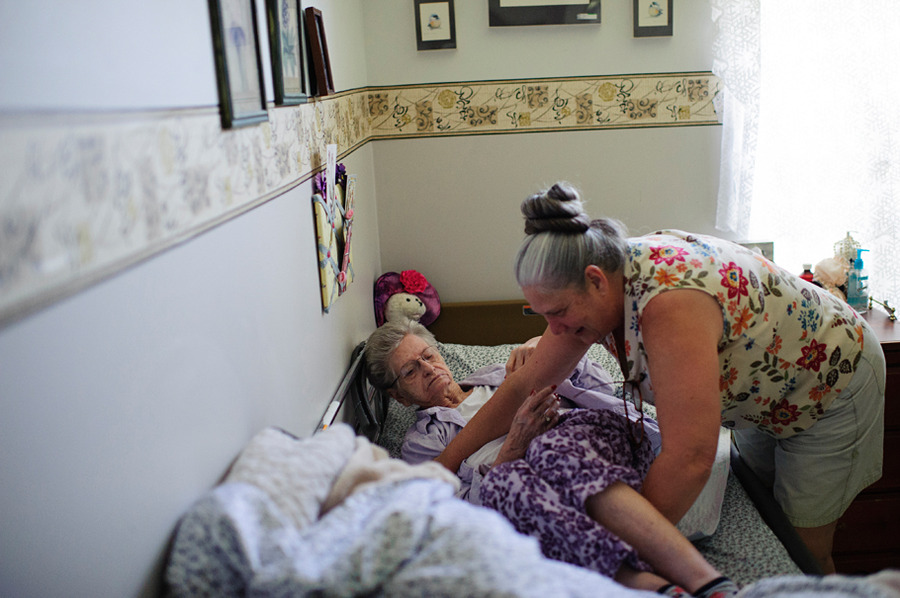 Debora helps her mom, Jo Ann, back into bed after breakfast on Thursday, August 28. 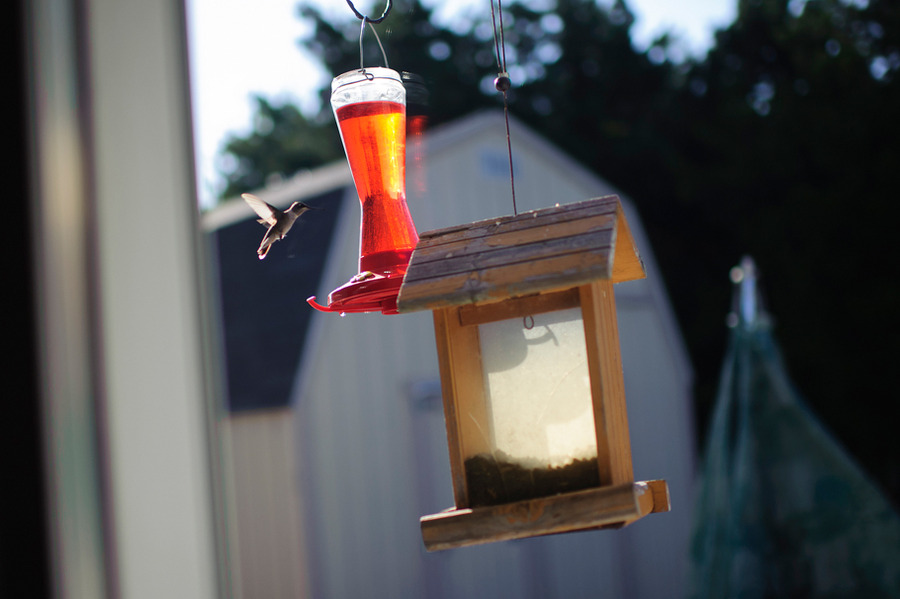 Bird feeders hang just outside the patio door next to the kitchen table where the sisters can see them. Jo Ann and Jacqulynn watch the birds and wildlife for hours and note how freely they move around. 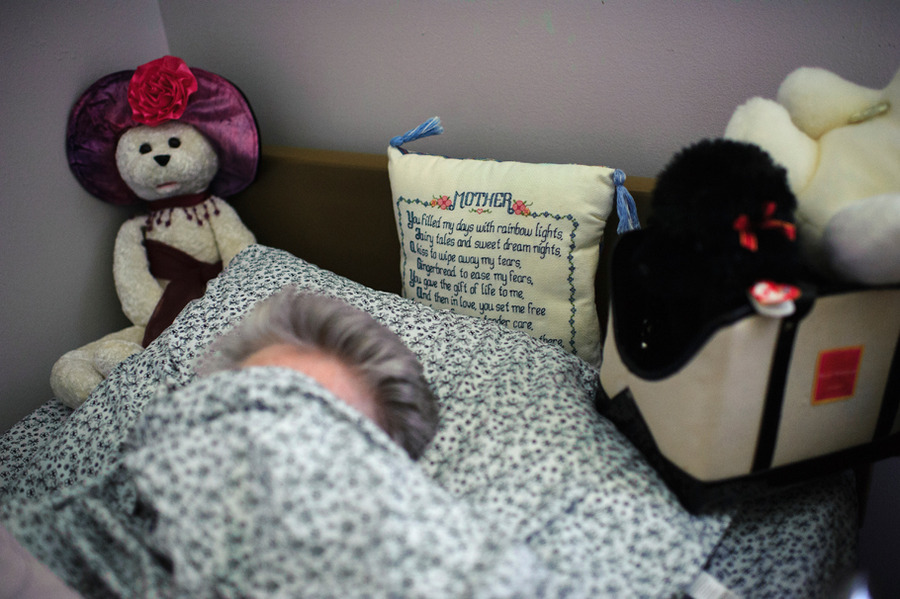 Jo Ann hides under the sheets to stay warm on Thursday, August 28. 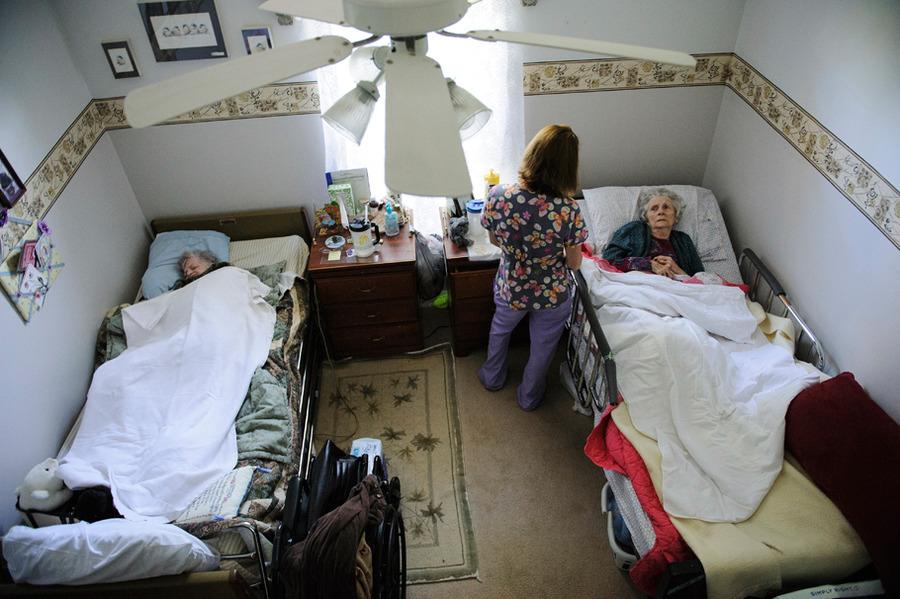 Jo Ann, left and Jacqulynn, right are awakened by Jamie McKinney, a certified nursing assistant with Right at Home, on Friday, September 27. The sisters sleep in the same room to make it easier for Debora to care for them together. Jo Ann had pictures and cards hung on the wall next to her bed while Jacqulynn never decorated because she says she's still just visiting to help out with her sister. 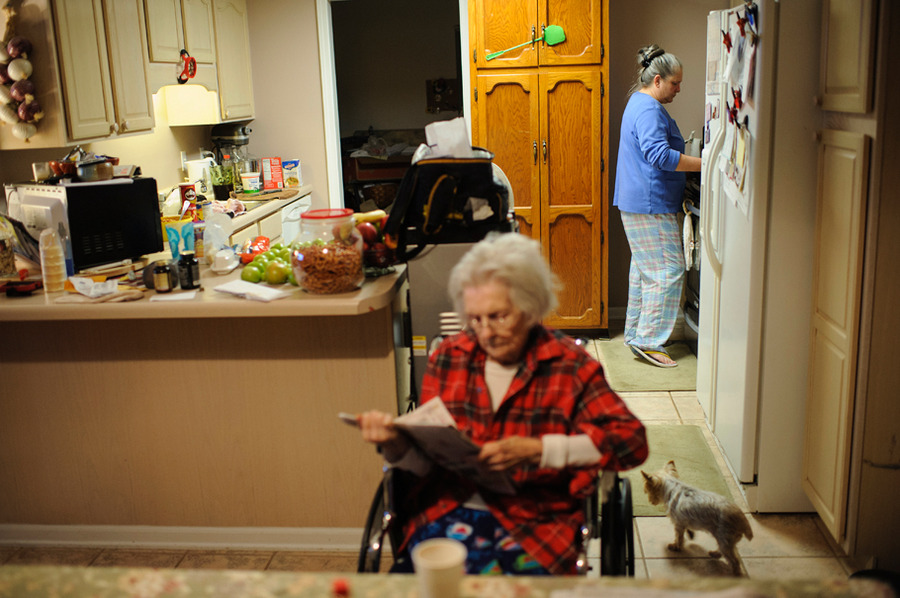 Debora, right, fixes a taco dinner for Jacqulynn on Thursday, Oct. 24. Jo Ann now often has an early dinner and goes back to bed, leaving Jacqulynn the only sister to cook for. 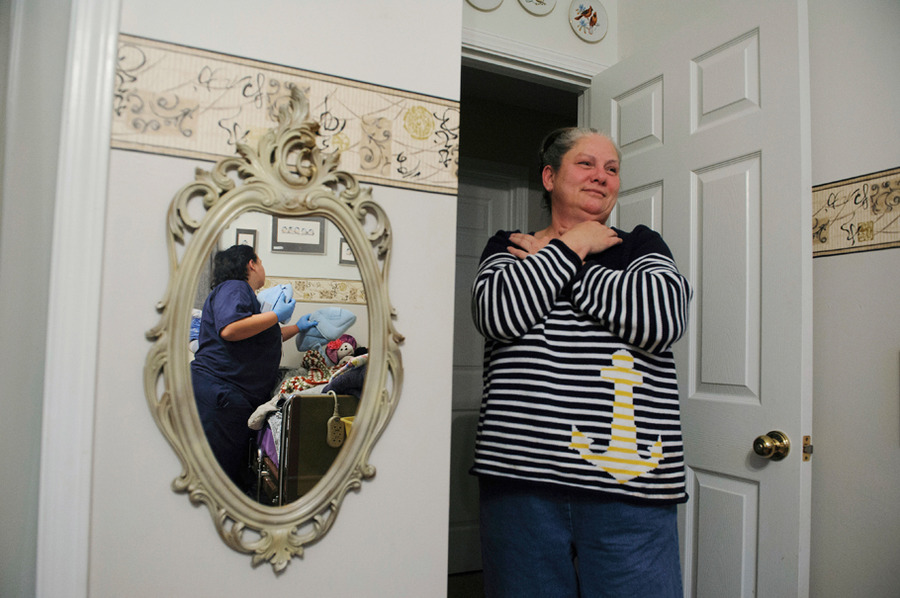 Debora smiles with relief after Natalea Bentley, an aide with Hospice Compassus, arrived to help take care of Jo Ann on Thursday, December 5. Jo Ann passed away three weeks later just after Christmas on December 30. Debora honored her mother's wishes and donated her body for medical research in Tennessee.